Well, it’s been over three months since I last updated. I guess I’m getting pretty bad at this blogging thing.

Life has been pretty crazy, mainly because work has been crazy, lately. So rather than go over all that stuff, here’s some photos from my recent San Francisco and Phoenix trips.

Salesforce had an Architecture Summit where all the company’s architects gathered together for three days to hear about current projects in the company and generally network and mingle. It was the first conference I’d ever been to, and it was exhausting, but overall a very worthwhile experience.

It was particularly memorable because of the food: Catered breakfast and lunch, plus two snack breaks, a day… and then organized dinners besides.

Oh yeah. My team had a presentation, too.

Afterward it was off to Phoenix for a week, with even more food.

Also saw Cirque de Soleil Amaluna with my parents. It was impressive.

Other than that, life has been board game-y. Photos of those are on my photos site, which I guess is the only thing I really keep up to date anymore.

Hopefully it won’t be another three months before the next post. :)

I’m, uh… really rather behind here. Which is matching the rest of my life pretty well, so I guess that’s not a huge surprise. Life’s photojournal and stats pages have finally been updated, a bit later than usual, mostly because I’ve been super behind in photo sorting and tagging recently.

Anyway, lots of things have been happening lately. Let’s see how many I can remember…

We’re in something like year six of four weddings per year, except last year which only had three. But this year felt like it had to make up for last year by having six weddings. Unfortunately (or maybe fortunately, for travel), two of them are on exactly the same dates as two others, so we’re only going to four. But one of those is in Hawaii, a week before I have to be in SF for work again, which is in turn a week before another wedding in Chicago. Which is a week before another wedding in San Francisco. It’s going to be an insane travel time.

Speaking of insane travel, I was in San Francisco for work in April, and it was a nice time.

But I had to rush back, without the usual Phoenix stopover, because the following week was Carnival! We had fewer guests in our house this year than last (two kids and three adults, compared to last year’s two kids and six adults), which I think was a lot more manageable. Carnival itself, however, made up for the relative calm at home by being both a reunion year and being the KGB 30 celebration, which meant there were lots (and lots) of events to worry about.

After the craziness of that stuff died down, work started picking up again. I officially got a promotion to Architect, which is insane and also means I’m dealing with things across four different teams now. Which I’d been unofficially doing anyway, but somehow it just feels a lot more serious now or something.

I also bought more Dragon Ball Z card game cards. Lots and lots of cards. 12,460 cards, give or take a couple booster packs. So, with that, there’s been a lot of pack opening and card sorting and things that I generally find relaxing and soothing. Which is nice, except it means I’ve been neglecting other personal projects like photos. Still have over half of it left to open, but I don’t have to deal with it all now.

In more recent things, winter seems to have finally ended, and Brian hosted a rose wine party to celebrate. We drank a lot of wine, but I guess we were also a reasonably large group, so it’s not too crazy.

Life goes, and feels like it’s mostly been consumed by work lately. It’s not that work has gotten particularly busier or more difficult than usual, but I’ve found myself having a really stressful time with it anyway. I think a lot of it is probably due to my increased (really, changed) responsibilities and I start overseeing different areas and products from a technical standpoint more than actually embedding within a team and generating code output. When I do end up coding, it’s usually been for either weird things that no one else wants to touch, or cleanup work that is pretty mind-numbing.
I guess we’ll see how things are looking and feeling after this release is over, but it’s been utterly bizarre to no longer be writing code every day, and having solid meeting days become a more frequent occurrence.

In other (perhaps related) news, I’ve been having a lot of trouble sleeping lately. I’m not entirely sure why, since I have no trouble falling asleep during the day if I want to take a nap. But at night, as I lay in bed, it seems there’s just endless thoughts and ideas and concerns that fill my head all at the same time, and I can’t clear my head enough to actually doze off. Often, when I do sleep, I find myself waking up randomly in the middle of the night and then unable to fall back asleep for hours, if at all.
This is a pretty recent problem, and it seems to coincide pretty well with my generally feeling increased stress levels at work, so we’ll see if things get better once we finish this release.

In non-work news, and in terms of things consuming most of my non-work time, I’ve been working on a game. This isn’t particularly new news, given I’ve been working on this game since something like February of this year, but it’s recently become a bit more of a time sink as it’s finished to the point of being playable and I’ve started hiring artists and putting polish onto it. It’s not something I feel comfortable sharing with the world at large yet, but I’ve learned a lot of really interesting things from doing it.

My main takeaways are that I’m really, really appreciating having a well-paying day job, and that I really wish I had any artistic talent whatsoever so I could try my hand at doing at least some of this myself. Also I wish I was filthy rich so I could just finance a bunch of awesome artists to create art unrelated to anything I was doing, because that stuff is hard, yo.
It really feels to me like pretty much anyone can code (especially given how important it’s become, in a lot of ways, now), but very few people can art well, which is only amplified by the fact that the engine I’m using (RenPy) makes it extremely easy for anyone to write a game with basically zero coding ability. The people that seem to make the best games on it seem to be people that can draw sprites and backgrounds and CGs, rather than people that can code.

In other, unrelated news, my second daily photo project ended yesterday. It had long since run its course, and I often found myself going downstairs and taking pictures of the stove or something. Still, I managed to do a daily photo for over a year, which is a pretty nice thing.

This has become a wall of text, so here’s some photos. 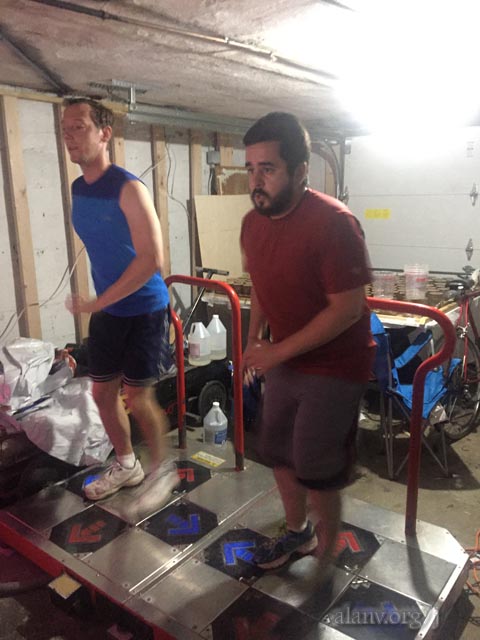 It’s been a horrific week, both in politics and in work, but at least I’m home.

On the politics front, it goes without saying that this administration has been absolutely insane, hypocritical, dysfunctional, and ruthless in its actions regardless of (or perhaps in spite of) facts, reason, and the law.
I’ve been donating $300 a month to the ACLU, and will likely raise it next month, as well as making sporadic donations to the EFF and maintaining an NYT subscription. If you have the financial means to help, I encourage you to make some donations as well, particularly to the ACLU, which has already played a role in part of the immigration ban being stayed.
Also consider some more locally-impacting charities that will directly help your area. Here again is my list of charities (as well as suggestions by friends).

Seen on Facebook (via Greg): John McCain, Dick Cheney, Michael Moore, and the Pope are all on the same side right now.
I guess that’s how you know your administration is batshit insane. :\

On the work front, we’ve had a rather disastrous release filled with e-releases and customer cases… and the release isn’t even half deployed yet. I feel really bad for my manager, who has to deal with all this as well as pressure from upper management… and particularly bad because a lot of the issues that came up came up in features I built and designed. To be fair, the features themselves are working exactly as expected, and we put in existing toggles for customers that have problems. But due to either oversights or underestimates on the sheer magnitude of impacted customers, we’re having to pull out or tweak the features anyway.
Le sigh.

Things are depressing so here are some photos.

The new Apple store in Chandler is really pretty. (Also the outside of the store has no indication in any way that it’s an Apple store, but I guess it’s pretty obvious from the interior.)

I guess they have to clean escalators somehow…

Ikea is doing that “kids draw things and we make them into stuffed animals” thing again.

I also brought back a lot of TCGs (including my entire collection of Pokemon cards and X-Files cards, and my remaining WoW cards) and have been sorting them and generally assembling decks. I now have assembled WoW “booster” packs to do a booster draft (limited card selection to 4 different classes so drafting won’t be insane) and assembled two X-Files TCG decks, and will be making Pokemon and Case Closed decks as the next thing. Yay for TCGs?

Edit: Woke up feeling unhappy this morning, and I wanted to use up my company match for their FY, so gave another $1500 to the ACLU. Take that, Trump.

It’s been an interesting January.

Returned to work last Thursday, the 5th. It was a standard no-meetings Thursday, so I was expecting it to be pretty quiet, but instead I got thrown into a P0 bug and several other problems related to the release that had just gone out.

Friday started out as a much more laid-back day, until lunch time, when I got a call from my mom, which resulted in me booking a flight to Phoenix less than 3 hours before it took off, and rushing to the airport.
If you know me, you know I’m the kind of person that likes trips planned far in advance, and has all logistics worked out, and gets to the airport hours before boarding to make sure I have no surprises. So this was a particularly new kind of stress, although it worked out fine in the end.

So now I’m unexpectedly in Phoenix for a couple of weeks. It’s nice seeing friends here again, but otherwise life has been fairly monotonous outside of work, which continues to be stressful.

Although work at least has been more design-y and meeting-y than code-y, which has been good given I’m on a slower connection here using my manager’s box for development work. Sometimes I don’t realize how much I love having a box physically with me until I have to remote to one to work from Phoenix.